All The Year Round Volume 8 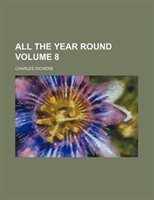 Purchasers can download a free scanned copy of the original book (without typos) from the publisher. Not indexed. Not illustrated. 1872 edition. Excerpt: ...whistling of a score of grooms and the rattling of carriage-wheels going in and out. How different it was now! But if the stables were desolate what do you suppose the house was? We found my lord''s valet in the kitchen looking like a single parched pea in a big canister. He was small, and thin, and spare, and had a scared face as if every night he slept with the clothes drawn over his head for fear. We were welcome to see over the Hall, he said; and he would go with us, for it was not often he had a chance of any talk with anybody save himself. So he and I walked together, and my sweet young lady, with her baby in her arms, strolled here and there with a serious sad face which scarcely brightened up once. It was no place to raise one''s spirits, it is true. There were all the grand saloons with the furniture left in them as if they were in daily use, and yon might expect my lord to come in and sit down on one of the satin chairs, or come upon some of his gay Loudon visitors playing at billiards, or laughing and chatting in one of the boudoirs. The bed-chambers were the same, with the beds made up as if they were slept in every night; and I could not help the feeling that they were slept in, though I would not have said so to my lord''s valet for the world. Desolation reigned over the place; and I could not get it out of my head that it was being cleansed from the stains and disgrace of my lord''s wicked ways, by being given up to silence and loneliness, and the soundless creeping presence of inmates whom wo could not see. When will my lord come backr'' I inquired. Never! said the valet, very drearily; but I live in hopes that Mr. Lionel will marry, and come here. I live in hopes. We were walking through a gallery...