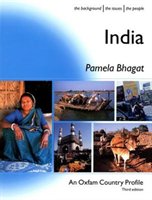 India is now the world s tenth most productive industrialized country, and the second-largest exporter of computer software

Its middle class is larger than the total population of the U.S. But, as this new book shows, the lands, rights, and livelihoods of the rural poor have been sacrificed to commercial ventures such as mining and forestry; in the cities, economic liberalization has led to social conflict and deepening deprivation. Pamela Bhagat, a well-known Indian journalist, visited many Oxfam-supported communities to see for herself how local voluntary groups are establishing development programs with some of the most marginalized members of society: ethnic minorities and tribal peoples, Dalits (former Untouchables ), low-caste women, and people with disabilities. Her book draws on the life stories of a wide range of inspiring individuals, presenting them in the context of India s ancient and recent history, and explaining how local communities are affected by the impact of national and global economic trends.