Over the past thirty years, there has been a dramatic shift in the way the legal system approaches and resolves family disputes

Traditionally, family law dispute resolution was based on an “adversary” system: two parties and their advocates stood before a judge who determined which party was at fault in a divorce and who would be awarded the rights in a custody dispute. Now, many family courts are opting for a “problem-solving” model in which courts attempt to resolve both legal and non-legal issues. At the same time, American families have changed dramatically. Divorce rates have leveled off and begun to drop, while the number of children born and raised outside of marriage has increased sharply. Fathers are more likely to seek an active role in their children’s lives. While this enhanced paternal involvement benefits children, it also increases the likelihood of disputes between parents. As a result, the families who seek legal dispute resolution have become more diverse and their legal situations more complex. In Divorced from Reality, Jane C. Murphy and Jana B. Singer argue that the current problem solving model fails to address the realities of today''s families. The authors suggest that while today’s dispute resolution regime may represent an improvement over its more adversary predecessor, it is built largely around the model of a divorcing nuclear family with lawyers representing all parties—a model that fits poorly with the realities of today''s disputing families. To serve the families it is meant to help, the legal system must adapt and reshape itself. 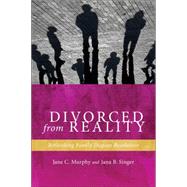