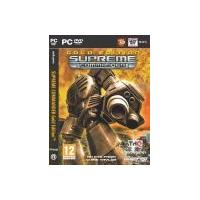 Intuitive and customizable gameplay interface with unsurpassed command and control features let you The combination of two Supreme Commander titles are joined together to put the strategy back into RTS! Includes both Legendary Supreme Commander titles - Supreme Commander and Supreme Commander Forged Alliance. Features four unique factions, two epic campaigns, and one critically acclaimed strategy experience!Combat on an unprecedented scale where you attack with unique land, sea, and air units and wage war across frozen tundras, scorching deserts and vast oceans. Devastating experimental units will finish the job. Genra-defining command and control - control your units from any vantage point. Issue orders from the theater of war commander's view, or zoom down into the heart of the battle and adjust your strategies on the included:Supreme Commander Supreme Commander Forged Alliance Supreme Commander In the 33rd Century, the old Earth Empire finally collapsed. As chaos engulfed the interstellar empire, the military, under the aegis of the Earth Command, stepped forward to restore order. Acting in a severe and often draconian manner, Earth Command made the difficult decisions that politicians, mired in corruption and their own self-interest, could not. Entire worlds were abandoned, and much of the Quantum Gate network was intentionally destroyed in an effort to isolate the retreating Prime Worlds from the rest of the galaxy. Despite the best efforts of the military, civil war erupted. After a hundred years, Earth Command was finally able to restore order and establish a new government, which was christened the United Earth Federation. Risen, phoenix-like from the ashes of the old Earth Empire, the United Earth Federation vowed to purge itself of bureaucratic corruption and remain pure to a single task: the rescue of mankind's war-torn worlds and an end to the Infinite War. By any and all means necessary. It has worked toward that goal by maintaining an iron grip on the new empire, creating a totalitarian government out of what might be considered the most successful