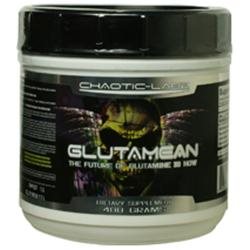 GLUTAMEAN 400 GRAMS HERE ARE JUST A FEW REASONS TO USE GLUTAMEAN FOR RECOVERY INSTEAD OF THE OPPOSITION! 1. GLUTAMEAN contains L-Alanyl-Glutamine, which is a dipeptide with a glutamine amino group joined to an Alanyl residue.

GLUTAMEAN 400 GRAMS HERE ARE JUST A FEW REASONS TO USE GLUTAMEAN FOR RECOVERY INSTEAD OF THE OPPOSITION! 1. GLUTAMEAN contains L-Alanyl-Glutamine, which is a dipeptide with a glutamine amino group joined to an Alanyl residue. It has excellent stability and is readily soluble in aqueous solutions GLUTAMEAn works by providing you a 100% stable dipeptide chemical structure which is strong enough to be mixed in water or other beverages without any degradation or loss to the chemical structure, so your body has to absorb it as is, period! 2. GLUTAMEAN also contains Glutamine Alpha-Ketoglutarate, which is a new, advanced form of glutamine on the market. Glutamine Alpha-Ketoglutarate efficiently bypasses the gut and has the ability to enter the muscle cell directly giving you Superior Absorption and Cell Volumization. Unlike L-glutamine, GAKG is shuttled directly to the muscle cells rather than being absorbed and used by the small intestines for nucleotide synthesis. As a result, more glutamine is able to enter the muscle cells creating a Pro-Anabolic Environment increasing Protein Synthesis, Growth Hormone Secretion and Nitrogen Retention. When glutamine is stored in the muscle cell, it produces a Cell Volumizing effect which works synergistically with other supplements like CREAMEAN . Glutamine stored in the muscle has been shown to promote muscle synthesis, have a positive effect on Nitrogen Balance and Reduce Muscle Breakdown following intense physical activity. Glutamine-Alpha-Ketoglutarate is more effective than L-glutamine. GLUTAMEAN only uses the 2:1 ratio which means that two molecules of glutamine are chemically bonded to one molecule of Alpha-Ketoglutarate (AKG), which is the most potent for of GAKG on the market! 3. GLUTAMEAN has a time-released matrix, it is able to circulate throughout the body unaffected as a time release agent until every gram is infused into the muscle tissue (average time release as measured = 12 hours!) The p