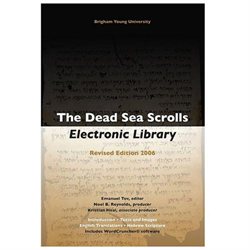 Prepared by the Neal A. Maxwell Institute for Religious Scholarship, Brigham Young University, Provo, Utah, under the editorship of Emanuel Tov. The Dead Sea Scrolls (DSS) probably represent the most significant manuscript discovery in recent history. These ancient texts have revolutionized the field of biblical and Judaic studies, and they have become an indispensable source for scholars and students alike. Although most of the texts have been published in some form or other, scholars have now only begun to grasp the true meaning and relevance of the scrolls for our understanding of ancient Judaism, the transmission of the biblical texts, and the origins of Christianity. This third volume of the DSS CD-ROM gives a more complete coverage of all of the published non-biblical DSS materials, including scrolls identified in 2004 and 2005. Anyone using the CD-ROM will be able to access texts, images, and reference materials quickly and efficiently. The combination of a powerful text search engine and sophisticated image-manipulating software will enable scholars and students unparalleled research possibilities. A major new feature is the addition of morphological analysis to all of the texts. This data gives glosses and part of speech analysis for each word in the database. The database is powered by version 7 of WordCruncher(R). This version is fully Unicode compatible, meaning that you can cut and paste from the database into Microsoft Word etc. The software makes full accommodation of the features of the Hebrew and Aramaic languages, by allowing users to search for words according to their root forms in theselanguages. The database has an improved image set. Many images have been replaced with higher resolution copies, additional images have been included, and each fragment or scroll image is individually labelled. With special thanks to West Semitic Research, who gave permission for the reproduction on the cover: Photograph by Bruce and Kenneth Zuckerman, West Semitic Research. Courtesy Department of Antiquities, Jordan. DSSEL - System requirements -Operating System: Windows 2000, XP -Processor: Pentium 3 or equivalent, or better -RAM: 256 MB minimum -Free hard disk space: 2GB (installed) -CD-ROM drive: 16x speed, preferably faster -Screen Resolution: 1024x768, or higher The Dead Sea Scrolls Electronic Library was awarded Choice Outstanding Academic Title 2007,