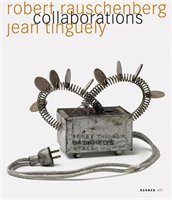 Over the course of his entire career, Robert Rauschenberg dedicated works to only five other artists: John Cage, Merce Cunningham, Marcel Duchamp, Jasper Johns, and the Swiss artist Jean Tinguely

The practices of Tinguely and Rauschenberg, both of whom were born in 1925, intersected kinetically during a few pivotal years in the early 1960s. In a 1960 exhibition at The Museum of Modern Art in New York, just weeks after Tinguely arrived in New York for the first time, the Swiss artist presented Homage to New York, a self-destructing mass of metal to which Rauschenberg contributed a toaster that flung silver dollars at the audience. The two men joined forces on several more artistic projects, despite their aesthetic differences: Rauschenberg once remarked of Tinguely, He liked mechanical things such as engines; I preferred hedonistic things such as bathtubs. Robert Rauschenberg & Jean Tinguely: Collaborations documents this productive friendship.