Welcome to Flint, Michigan, one of the roughest little cities in America, a place where the good die young, loyalty is a rarity, and everybody has a hustle

Malek Johnson's hustle is the basketball court, and he's the best Flint's projects has ever produced. All the NBA scouts say he's destined for the pros straight out of high school. He finds love in the super fine girl everyone calls Halleigh, and he promises her that he will take her out of the hood. When Halleigh's virginity is traded in exchange for her mother's drug tab, their dream spirals out of control and they are quickly separated and sucked into the life that they have so desperately tried to avoid.Malek becomes affiliated with the North Side's biggest kingpin and quickly rises to the top of the ranks, while Halleigh is sucked into the streets by Manolo, the South Side's biggest pimp. These two young lovers are now on opposite sides, surrounded by grimy characters who seem determined to keep them apart. Will Halleigh and Malek's love be strong enough to bring them back together? And if they do meet again, will they share the same love they once had, or have the streets of Flint claimed two more victims in the game? Treasure Hernandez has crafted a powerful street love story, and now fans of this inner-city Romeo and Juliet can read the whole saga from cover to cover in one drama-filled volume. 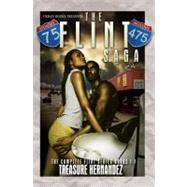