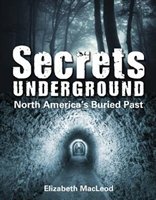 Uncover the spine-tingling mysteries and eerie surprises that lurk right under your feet! In Secrets Underground, history buff Elizabeth MacLeod takes readers deep down, down, down below the earth''s surface, and introduces them to a completely different world -- sometimes terrifying, often baffling, and always fascinating

Discover: the Civil War secrets carefully concealed in Organ Cave, West Virginia the top-secret equipment that lies deep below Grand Central Terminal in New York City the network of tunnels in Moose Jaw, Saskatchewan, that once hid victims of persecution -- and illegal liquor transported by notorious Chicago gangsters how the Aztec city Tenochtitlan, the largest and most powerful city of its time in what is now North America, nearly disappeared without a trace the abandoned ships buried beneath San Francisco that reveal the city''s history as a top destination for fortune seekers during the Gold Rush the nuclear shelter the U.S. government kept hidden for decades underneath an exclusive resort in West Virginia called The Greenbrier. Guiding readers through these fascinating places, MacLeod reveals their long-kept secrets and deftly explains how these lost and hidden subterranean passages, spaces, and caves answer decades-old puzzles, help us understand our own past, and lead us to discover what life was really like in eras gone by.