It is the second edition of a monograph that was first published in Russian, and has been substantially updated with new data, conclusions and references. The goal of this ground-breaking work is to document the author''s study of the karyotype structure and chromosomal evolution of parasitic Hymenoptera. It also interprets the results obtained, from both routine and differential chromosome staining, for systematic and phylogenetic purposes. Despite the huge importance of parasitic wasps, many problems of their taxonomy remain insufficiently studied. This is a situation that needs rectifying, as Hymenoptera are one of the largest and most taxonomically complicated groups of insects and they play a very important role in food chains as parasitoids of the overwhelming majority of insects and other arthropods. Parasitic wasps attack many pests of agriculture and forestry as well as certain beneficial insects. In addition, some secondarily phytophagous Hymenoptera damage certain cultivated plants. The renowned entomologist and author of this volume, Vladimir Gokhman, has himself developed a particular technique for obtaining chromosomal preparations from adult parasitic wasps. This allowed the inclusion of a wide range of those insects into the study. The karyotypic features of the majority of superfamilies and families as well as many lower taxa of parasitic Hymenoptera are listed, while the plesiomorphic and apomorphic character states of chromosome sets of parasitic wasps are revealed. The structural features of karyotypes used for identifying and discriminating sibling species and similar forms are shown, as are the data on chromosome sets of about 400 species of parasitic Hymenoptera (including more than 200 micrographs). Also included is a comprehensive phylogenetic and taxonomic analysis of karyotypic information. This book is unique because it demonstrates a range of karyotypic data for an insect group that seemed unattainable in this respect not so long ago. Rich in new facts, techniques and ideas, it will be of use to all those interested in karyology and Hymenoptera. 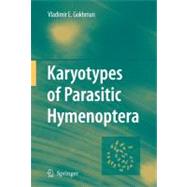