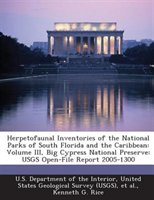 Amphibian declines and extinctions have been documented around the world, often in protected natural areas

Concern for this trend has prompted the U.S. Geological Survey and the National Park Service to document all species of amphibians that occur within U.S. National Parks and to search for any signs that amphibians may be declining. This study, an inventory of amphibian species in Big Cypress National Preserve, was conducted from 2002 to 2003. The goals of the project were to create a georeferenced inventory of amphibian species, use new analytical techniques to estimate proportion of sites occupied by each species, look for any signs of amphibian decline (missing species, disease, die-offs, and so forth.), and to establish a protocol that could be used for future monitoring efforts. Several sampling methods were used to accomplish these goals. Visual encounter surveys and anuran vocalization surveys were conducted in all habitats throughout the park to estimate the proportion of sites or proportion of area occupied (PAO) by each amphibian species in each habitat. Opportunistic collections, as well as limited drift fence data, were used to augment the visual encounter methods for highly aquatic or cryptic species. A total of 545 visits to 104 sites were conducted for standard sampling alone, and 2,358 individual amphibians and 374 reptiles were encountered. Data analysis was conducted in program PRESENCE to provide PAO estimates for each of the anuran species. All of the amphibian species historically found in Big Cypress National Preserve were detected during this project. At least one individual of each of the four salamander species was captured during sampling. Each of the anuran species in the preserve was adequately sampled using standard herpetological sampling methods, and PAO estimates were produced for each species of anuran by habitat. This information serves as an indicator of habitat associations of the species and relative abundance of sites occupied, but it will also be useful as a comparative baseline for future monitoring efforts. In addition to sampling for amphibians, all encounters with reptiles were documented. The sampling methods used for detecting amphibians are also appropriate for many reptile species. These reptile locations are included in this report, but the number of reptile observations was not sufficient to estimate PAO for reptile species. We encountered 35 of the 46 species of reptiles believed to be present in Big Cypress National Preserve during this study, and evidence exists of the presence of four other reptile species in the Preserve. This study found no evidence of amphibian decline in Big Cypress National Preserve. Although no evidence of decline was observed, several threats to amphibians were identified. Introduced species, especially the Cuban treefrog (Osteopilus septentrionalis), are predators and competitors with several native frog species. The recreational use of off-road vehicles has the potential to affect some amphibian populations, and a study on those potential impacts is currently underway. Also, interference by humans with the natural hydrologic cycle of south Florida has the potential to alter the amphibian community. Continued monitoring of the amphibian species in Big Cypress National Preserve is recommended. The methods used in this study were adequate to produce reliable estimates of the proportion of sites occupied by most anuran species, and are a cost-effective means of determining the status of their populations.