Stratigraphy Of The Mesaverde Group In The Central And Eastern Greater Green River Basin, Wyoming, Colorado, And Utah: Usgs Profes

CHECK IT $23.95 cad Indigo
Stratigraphy Of The Mesaverde .. 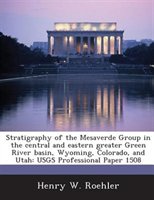 This paper establishes a stratigraphic framework for the Mesaverde Group, nearly 5,000 ft thick, in the central and eastern greater Green River basin based on data from measured outcrop sections and drill holes

Stratigraphic correlations are supported by ammonite zonation. No new stratigraphic names are introduced, and no nomenclature problems are discussed. Five long measured sections through the Mesaverde Group are described. The lower part of the Mesaverde Group, comprising the Rock Springs, Blair, Haystack Mountains, Allen Ridge, and Iles Formations, was deposited during a major eastward regression of the interior Cretaceous seaway of North America during the late Santonian and early Campanian. This regression was followed by regional uplift of the central Rocky Mountain area during the middle Campanian. The regional uplift was accompanied by widespread nondeposition and erosion, which, in turn, were followed by deposition of the Ericson and Pine Ridge Sandstones. The upper part of the Mesaverde Group, comprising the Almond and Williams Fork Formations, was deposited during a major westward transgression of the interior seaway in the early Maestrichtian. The major marine transgressions and regressions of the interior seaway were caused by eustatic changes of sea level, whereas intervening periods of nondeposition and erosion resulted from tectonism in the Sevier orogenic belt west of the study area. Formations of the Mesaverde Group are composed of sediments deposited in a landward-seaward progression of alluvial-plain, floodplain, coastal-plain, barrier-plain, tidal-flat, delta-plain, marine-shoreline, and marine-shelf and slope depositional environments. Each of these depositional environments is represented by specific lithofacies, sedimentary structures, and fossils, which are characteristic of depositional settings determined by water salinity, water depth, sedimentary and diagenetic processes, and the nature of sediment source terranes. The Mesaverde Group was deposited mainly along the western margins of the interior Cretaceous seaway as marine shorelines that trended north to northeast across the study area. Arcuate deltas, which formed at the mouths of major rivers along these shorelines, spread eastward onto shallow marine shelves. Embayed shoreline areas between the deltas were the sites of barrier-island and tidal-flat deposition. Alluvial-plain, flood-plain, and coastal-plain environments were present inland. The marine shorelines were tidally influenced and wave dominated, and shoreline deposits were mostly thick, linear sheets of quartzose sandstone. Deposition was largely controlled by the emergence or submergence of shoreline areas. Stillstands occurred close to local transgressions and regressions, depending on rates of sedimentation and subsidence.

Stratigraphy Of The Mesaverde Group In The Central And Eastern Greater Green River Basin, Wyoming, Colorado, And Utah: Usgs Profes (2021-03-18)