Till The Clock Stops 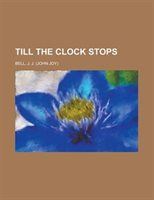 The worker let go with a shrug of his shoulders, and proceeded to bundle up his tools. I could do wi'' a drink now, he grumbled. Neat. Bullard turned to the small table at his elbow, and poured out half a tumbler of whisky. The other, having stuffed the bundle into his pocket, rose, seized the glass, and gulped the contents. He set the glass on the table and held out his hand. Bullard laid a heap of sovereigns in it, and it closed as if automatically. Report when he''s really hungry, said Bullard in an undertone, and the man nodded. Mr. Lancaster, he said aloud, would you mind showing this man to the door? I''ll do nothing till you come back. Eh-what''s that? quavered Lancaster, exposing a dazed-looking countenance. Oh, I''ll do it, said his wife, rising impatiently. This way, my man. He slouched out after her. There was silence in the room till she returned. What a loathsome creature, she remarked. Flitch, you called him. Is not that the name of the man who went out hunting with Alan Craig, Mr. Bullard? No wonder- Look here! said Bullard, and lifted the lid. The woman''s breath went in with a hiss. Unable to resist, her husband crept from his place and stood peering over her shoulder. Bullard lifted out the shallow trays and laid them side by side. The room seemed to be filled with a new light. Six hundred thousand pounds, Bullard murmured. Oh! exclaimed Mrs. Lancaster in a reverential whisper. Then she started violently. Nothing-nothing, she added quickly, and went on gazing. She had remembered that she had not re-locked the door, though she had drawn the heavy curtain. But she could not tear herself yet awhile from that delicious spectacle of wealth. They were all three fascinated. After a while Bullard moved slightly. May I choose a lucky one for you, Mrs. Lancaster? he asked, and picked out a fairly large stone. He dropped it as though it had stung. What''s this? He took up another and...