CHECK IT $31.95 cad Indigo
Bulletin Of The Newport Histor.. 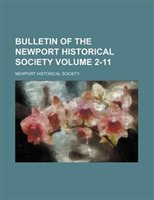 Purchasers can download a free scanned copy of the original book (without typos) from the publisher. Not indexed. Not illustrated. 1912 Excerpt: ...thereby meant to intimate that both were painted by the same artist, she did not realize that she was guilty of a gross anachronism, as Governor Coddington died before Smybert was born. She also says that an early example of cravat is shown in the portrait of Judge William Stoughton ol Massachusetts, which she also reproduces, and adds that the same mode of neck dressing is seen after that date in all American portraits, and goes on to say that one is shown with great exactness in the portrait on page 210 of her book, which is that of the so-called Coddington portrait as I have mentioned above, but Stoughton died many years after Coddington, and his active political and judicial life, when his portrait was undoubtedly painted, was during the years after Coddington had passed away, and I may also add that the subject of this portrait is without a wig, and clad in somber garb. Charles the 2d, who landed in England in 1660, and ascended the throne of his father, was the earliest King represented in the Great Seal as wearing a large periwig. This did not become the general custom, however, until after 1663, and the indefatigable diarist Pepys, who as a true courtier, always desired to be in the fashion, records his wearing one (rr-tPSy from his barber. This style of headwear was slow in spreading toTHis country, but if it had come more quickly, it could hardly have reached Coddington who we know had become a Quaker, certainly as early as March 1665 if not earlier, and that sect at that time and for some time later, at least, eschewed all adornments of that kind. It was only towards or after the beginning of the 18th century, as the colonies grew in wealth and importance, that there was a reaction in the costumes from the more severe dress of the earlier pe...