The History And Antiquities Of Roxburghshire And Adjacent Districts

CHECK IT $24.95 cad Indigo
The History And Antiquities Of.. 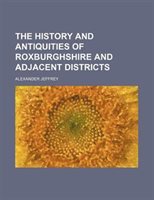 Purchasers can download a free scanned copy of the original book (without typos) from the publisher. Not indexed. Not illustrated. 1857 edition. Excerpt: ...or enjoying any other privileges. A regulation was made, forbidding muck to lie in the fore street longer than a week. In 1656 a charge was made by the treasurer against the bailies for pocketing fines for theft. Persons forbidden to brew in houses without a chimney. At the election this year Rutherfurd of Wells was objected to on the ground that he was under bond to the English. In May, 1657, Francis Hager, son of Colonel Hager, of the county of Nottingham; John Greaves, son of Humphrey Greaves, Esq., of the county of Salop; Edward Mosely and Henry Goodsir, two of his highness''s judges in Scotland, and a number of other gentlemen, admitted burgesses. In the same year an application was made by the burgh to the Earl of Roxburgh to allow St. James''s Fair to be removed from the Burrass or Tarrass, near Kelso, to Roxburgh muir. In May an order was made by the council to provide coals and other necessaries for the execution of the witches on Tuesday next. In 1658 Major Smithson''s troop was quartered in Jedburgh. Council-house of three stories built this year. In November, 1659, a letter was received by the council from General Monk desiring a commissioner to be sent to Edinburgh, as he was anxious to speak about affairs which concerned the country. Robert Kerr was elected commissioner, and a committee appointed to frame an answer to General Monk''s letter, which was ordered to be subscribed by all persons in the burgh. In a few days after the commissioner reported that the general had exempted the burgh from excise duty. In June, 1660, the magistrates and council resolved to make a show at the cross on Thursday next, being the thanksgiving for his majesty''s home-coming, and six out of...