The Animal Kingdom: Arranged In Conformity With Its Organization

Georges Cuvier (1769-1832), made a peer of France in 1819 in recognition of his work, was perhaps the most important European scientist of his day Specifications

His most famous work, Le Règne Animal, was published in French in 1817; Edward Griffith (1790-1858), a solicitor and amateur naturalist, embarked on in 1824, with a team of colleagues, an English version which resulted in this illustrated sixteen-volume edition with additional material, published between 1827 and 1835. Cuvier was the first biologist to compare the anatomy of fossil animals with living species, and he named the now familiar ''mastodon'' and ''megatherium''. However, his studies convinced him that the evolutionary theories of Lamarck and St Hilaire were wrong, and his influence on the scientific world was such that the possibility of evolution was widely discounted by many scholars both before and after Darwin. Volume 12 covers molluscs and radiata.

The Animal Kingdom: Arranged In Conformity With Its Organization (2018-11-15)

The Animal Kingdom: Arranged in Conformity With Its Organization (2021-03-19) 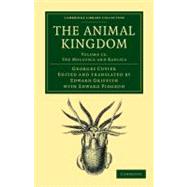