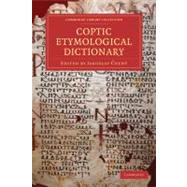 Coptic was the language spoken in Egypt from late ancient times to the seventeenth century, when it was overtaken by Arabic as the national language Specifications

Derived from ancient Egyptian, the language of the hieroglyphs, it was written in an adapted form of Greek script. This dictionary lists about 2,000 Coptic words whose etymology has been established from ancient Egyptian and Greek sources, covering two-thirds of the known Coptic vocabulary and complementing W. E. Crum''s 1939 Coptic Dictionary, still the standard in the field. The Egyptian forms are quoted in hieroglyphic and/or demotic forms. An appendix lists the etymologies of Coptic place-names. The final work of Czech Egyptologist Jaroslav Černý (1898-1970), Professor of Egyptology at Oxford, the Dictionary was brought through to publication by colleagues after his death.