Fusion Systems In Algebra And Topology

A fusion system over a p-group S is a category whose objects form the set of all subgroups of S, whose morphisms are certain injective group homomorphisms, and which satisfies axioms first formulated by Puig that are modelled on conjugacy relations in finite groups

The definition was originally motivated by representation theory, but fusion systems also have applications to local group theory and to homotopy theory. The connection with homotopy theory arises through classifying spaces which can be associated to fusion systems and which have many of the nice properties of p-completed classifying spaces of finite groups. Beginning with a detailed exposition of the foundational material, the authors then proceed to discuss the role of fusion systems in local finite group theory, homotopy theory and modular representation theory. The book serves as a basic reference and as an introduction to the field, particularly for students and other young mathematicians. 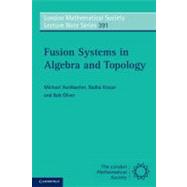