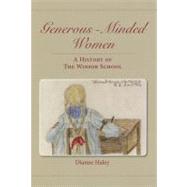 The School was incorporated upon moving in 1910 to the Riverway; by the twenty-first century the School was expanding into the Longwood area of Boston as one of the finest girls'' schools in the country. Beginning with the premise that girls should be educated in order to be self-sufficient, and proceeding with the conviction that all girls of promise deserved an opportunity to¬ learn, Mary Winsor and her successors dedicated themselves to creating and maintaining a dynamic intellectual community of students, teachers, alumnae, and parents.The early founders established a strong scholarship program that offered financial support to capable girls whose family resources were insufficient for an independent school education. The program grew as the School committed itself to serving girls in the city of Boston itself as well as those from the greaterBoston area, and the School sought to remove the aura of exclusiveness by stating boldly its dedication to inclusiveness.This is the story of a still-growing school and the people who established and guarded its traditions and values as well as its high educational standards.