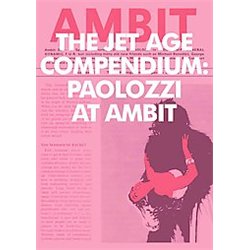 From 1967 up until his recent death, the British sculptor and Pop art innovator Eduardo Paolozzi (1924-2005) used the pages of the innovative British literary magazine Ambit as a space for some of his most experimental creations, collapsing the boundary between text and image with Pop abandon. His Ambit works-collages, visual essays and fragments from novels, pop culture images from newspapers, magazines and advertisements-tackle such subjects as the war in Vietnam, the acceleration of Japanese technology and the mirages of mass advertising. Housed in a funky Day-Glo plastic slip cover with silkscreened title, and printed on a variety of paper stocks, The Jet Age Compendium reprints these works in their entirety for the first time. A 28-page booklet by David Brittain inserted into the slip cover celebrates these works and discusses Paolozzi''s relationship to writers associated with Ambit such as J.G. Ballard.