Greece's 'odious' Debt: The Looting Of The Hellenic Republic By The Euro, The Political Elite And The

Jason Manolopoulos combines his experience of the global financial system, European politics and Greek society to demonstrate how one of the EU''s smaller countries played a catalytic role in a crisis that threatens the future of the euro, and possibly even of the European Union itself

He explores the historical legacy and psychological biases that have shaped an on-going drama. While leaders of the European Union criticise ''the markets'' for destabilizing the single currency, Manolopoulos interrogates the shared beliefs of the EU and the investment banking community - and how they colluded for a decade in the illusion that lending huge sums to peripheral eurozone countries was safe. Policy and investment errors bear marked similarities with earlier financial crises - in particular the Exchange Rate Mechanism system and the Argentine debt crisis. This inability to learn history''s recent lessons begs fundamental questions of policy making, which this book discusses. Greek society also comes under scrutiny, as shocking details of a kleptocratic political class and a wasteful public sector are revealed. Manolopoulos traces these developments back to dictatorship and civil war, but argues that there is no excuse for their continuation in a modern democracy.

Greece&apos;s &apos;odious&apos; Debt: The Looting Of The Hellenic Republic By The Euro, The Political Elite And The (2018-10-16)

Greece's Odious Default: The Looting of the Hellenic Republic by the Euro, the Greeks, the Political Elite and the Investment Community (2020-06-04) 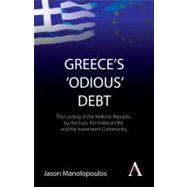