Slinging the Bull in Korea : An Adventure in Psychological Warfare

In the fall of 1951 a sign was posted beside a U.S Specifications

Air Force squadron headquarters: El toro es mas fuerte que la bala (The bull is mightier than the bullet). The sign testified to the recent creation of ARCS (Air Resupply and Communications Service), an Air Force enterprise in psychological warfare prompted by North Korea''s invasion of South Korea the previous year. One of ARCS'' critical duties was the creation and delivery of military propaganda to the enemy, and the author of this book, then an Air Force lieutenant, became an expert in the production and distribution of propaganda via leaflets.Campbell''s time in Korea became an extended adventure in applied psychology. Among the many useful features of this rare Korean War memoir are Campbell''s insights into the philosophies of Communist and democratic countries that would shape each other throughout the Cold War as the superpowers struggled for the hearts and minds of countries in Asia, Africa, and Latin America. The psy-ops struggles to manipulate America''s adversaries set the stage for forty years of subtle and not-so-subtle attempts to sway the enemy by nonlethal means.

Slinging The Bull In Korea: An Adventure In Psychological Warfare (2018-09-10) 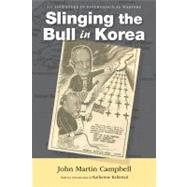