Microfinance And Its Discontents: Women In Debt In Bangladesh

This path-breaking study of gender, grassroots globalization, and neoliberalism in Bangladesh looks critically at the Grameen Bank and three of the leading NGOs in the country. Amid euphoria over the benefits of microfinance, Lamia Karim offers a timely and sobering perspective on the practical, and possibly detrimental, realities for poor women inducted into microfinance operations.In a series of ethnographic cases, Karim shows how NGOs use social codes of honor and shame to shape the conduct of women and to further an agenda of capitalist expansion. These unwritten policies subordinate poor women to multiple levels of debt that often lead to increased violence at the household and community levels, thereby weakening women’s ability to resist the onslaught of market forces.A compelling critique of the relationship between powerful NGOs and the financially strapped women beholden to them for capital, this book cautions us to be vigilant about the social realities within which women and loans circulate—realities that often have adverse effects on the lives of the very women these operations are meant to help.

Microfinance And Its Discontents: Women In Debt In Bangladesh (2018-05-21) 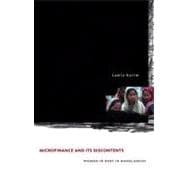