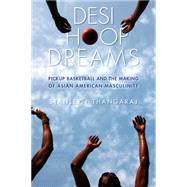 They struggle against popular representations as either threatening terrorists or geeky, effeminate computer geniuses. To combat such stereotypes, some use sports as a means of performing a distinctly American masculinity. Desi Hoop Dreams focuses on South Asian-only basketball leagues common in most major U.S. and Canadian cities, to show that basketball, for these South Asian American players is not simply a whimsical hobby, but a means to navigate and express their identities in 21st century America. The participation of young men in basketball is one platform among many for performing South Asian American identity. South Asian-only leagues and tournaments become spaces in which to negotiate the relationships between masculinity, race, and nation. When faced with stereotypes that portray them as effeminate, players perform sporting feats on the court to represent themselves as athletic. And though they draw on black cultural styles, they carefully set themselves off from African American players, who are deemed “too aggressive.” Accordingly, the same categories of their own marginalization—masculinity, race, class, and sexuality—are those through which South Asian American men exclude women, queer masculinities, and working-class masculinities, along with other racialized masculinities, in their effort to lay claim to cultural citizenship. One of the first works on masculinity formation and sport participation in South Asian American communities, Desi Hoop Dreams focuses on an American popular sport to analyze the dilemma of belonging within South Asian America in particular and in the U.S. in general.