Houses of History : A Critical Reader in Twentieth-Century History and Theory 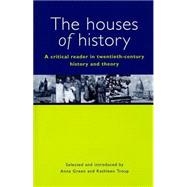 The Houses of History provides a comprehensive introduction to the twelve schools of thought which have had the greatest influence on the study of history in the twentieth century. Ranging from Empiricism to Postcolonialism, Marxism to the Ethnohistorians, each chapter begins with an introduction to the particular school, the ma protagonists, the critics, and is followed by a useful section of further readings. From the classic, such as G. R. Elton's 'England Under the Tudors' and E. P. Thompson's 'The Making of the English Working Class', to the recent, such as Henrietta Whiteman's 'White Buffalo Woman' and Judith Walkowitz's 'City of Dreadful Delight', the diverse selections_ collected hereof bring together the leading historian, and theorists the century.

Houses of History : A Critical Reader in Twentieth-Century History and Theory (2018-05-24)