This book explores the origins, process, and consequences of forty years of nearly continual political violence in southeastern Mexico Specifications

Rather than recounting the well-worn narrative of the Caste War, it focuses instead on how four decades of violence helped shape social and political institutions of the Mexican southeast. Rebellion Now and Forever looks at Yucatán''s famous Caste War from the perspective of the vast majority of Hispanics and Maya peasants who did not join in the great ethnic rebellion of 1847. It shows how the history of nonrebel territory was as dramatic and as violent as the front lines of the Caste War, and of greater significance for the larger evolution of Mexican society. The work explores political violence not merely as a method and process, but also as a molder of subsequent institutions and practices. 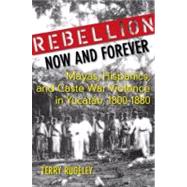