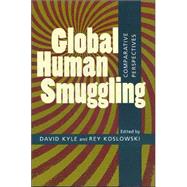 During the past decade, human smuggling across national borders grew from a low-level border crossing activity in a handful of countries to a diverse multibillion dollar business spanning the entire globe