Several years ago, one of Spider-Man''s greatest enemies, Kraven the Hunter, stalked his last prey, dying with a violent, misbegotten honor

Now, two women claiming to be his wife and daughter have tracked Spider-Man, through the urban jungle, weakening him through the Gauntlet while they prepare to attempt an unholy resurrection. They''re hunting Spiders...and Spider-Man''s friends and namesakes are in their sights. J.M. DeMatteis, author of the classic Kraven''s Last Hunt returns to the Amazing Spider-Man with Max Fiumara to explore an unknown confrontation between Kraven and Spidey''s violent doppelganger KAINE. Collecting: Amazing Spider-Man #634-637, Grim Hunt Prologue and material from Web Of Spider-Man #7 & Spider-Man Origin Of The Hunter. 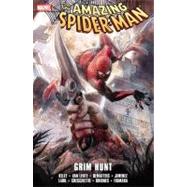