The Destruction Of The Books

The tale of “Wick” the lowly librarian who rises to the occasion and becomes a great adventurer struck a chord with adventure lovers and fantasy fans alike.After his adventures on the mainland Wick returned to his duties at the Vault of All Known Knowledge and quickly worked his way up the hierarchy , continuing his quest for the preservation of books and the knowledge contained therein.And now that quest is threatened.The Destruction of the BooksIt is many years later and lowly Wick is now Grandmagister Lamplighter of the Great Library. His trips to the mainland are fewer due to his advanced age, and lately he has enlisted an assistant by the name of Jugh to undertake those roving duties he used to relish.An encounter with a goblin ship on the high seas leads to Jugh’s discovery of a book in goblin hands, a most matter that must be investigated.This single event leads to startling revelations that forewarns of a great evil that exists that is every bit as powerful as the Vault of All Known Knowledge, and whose presence in the Great Library may indeed result inThe Destruction of the BooksAnd perhaps far worse.

Mel Odom's "The Rover" was a fun, light fantasy peopled by the stereotypical dwarves, elves, medieval humans and hobbitlike dwellers. Its sequel, "Destruction of the Books," is very different -- darker, nastier, and taking on the promise of epic battles that were only hinted at in "Rover."Librarion Juhg is the apprentice to the Grandmagister Wick of the hidden Library. When he hears a rumor of a rare book aboard a goblin ship, he and his ship's crew manage to get the book away -- but not without grappling w..
E. A Solinas "ea_solinas..
( 04/22/18 )

In this sequel to The Rover, Mel Odom takes us back to his world of elves, dwarves, wizards and (hobbit-like) dwellers. First-level librarian Juhg learns that a goblin ship will be sneaking into Kelloch's Harbor, carrying a book. Goblins aren't known for their love of books, so why is this ship carrying one? And so, Juhg and the crew of the pirate ship Windchaser setout to capture the book. But, there's more to the mystery of this book than meets the eye. Someone has set a trap, a trap in the shape of a boo..
Kurt A. Johnson (North-C..
( 11/24/17 )

The Destruction of the Books takes place many years after the Rover, with Wick as a supporting character. Mel puts Juhg, Wick's apprentice as the main character, with a rich supporting cast. Wick is a Dweller from the Island of Greydawn Moors, where the Dwellers are kept safe, along with the Vault of All Known Knowledge. Jugh was a slave in the Goblin's mines on the mainland. Since this book is told through Juhg's eyes, the world is a very different place. The Rover was quite a bit more light hearted, t..
Ronald W. Simpson (oklah..
( 06/07/18 ) 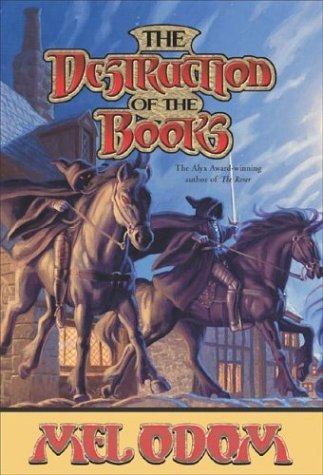