The Engines Of The Soul

This study is an unusual contribution to the philosophy of mind in that it argues for the sometimes unfashionable view of dualism: that mind and matter are distinct and separate entities as Descartes believed Specifications

The author takes as his point of departure the imaginative hypothesis of disembodiment, which establishes the possibility of the mind''s being a quite non-material thing. There are clear casual correlations between what is physical and what is mental, and the most serious issue confronting dualism since Descartes has been how such an interaction is possible. Dr Hart sets out to answer this question by showing that the issue is as much about the nature of causation as it is about the natures of mind and matter. 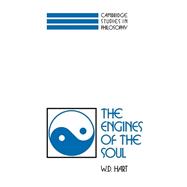