“Powerful . . . As haunting a postapocalyptic universe as Cormac McCarthy created in The Road, and as devastating a look as the fallout that national events have on an American family as Philip Roth did in The Plot Against America. . . . Omar El Akkad’s debut novel, American War, is an unlikely mash-up of unsparing war reporting and plot elements familiar to readers of the recent young-adult dystopian series The Hunger Games and Divergent.”—Michiko Kakutani, The New York TimesAn audacious and powerful debut novel: a second American Civil War, a devastating plague, and one family caught deep in the middle—a story that asks what might happen if America were to turn its most devastating policies and deadly weapons upon itself. Sarat Chestnut, born in Louisiana, is only six when the Second American Civil War breaks out in 2074. But even she knows that oil is outlawed, that Louisiana is half underwater, and that unmanned drones fill the sky. When her father is killed and her family is forced into Camp Patience for displaced persons, she begins to grow up shaped by her particular time and place. But not everyone at Camp Patience is who they claim to be. Eventually Sarat is befriended by a mysterious functionary, under whose influence she is turned into a deadly instrument of war. The decisions that she makes will have tremendous consequences not just for Sarat but for her family and her country, rippling through generations of strangers and kin alike. An Amazon Best Book of April 2017: American War will give you chills. Set in in 2075, Omar El Akkad's debut presents a fractured and frightening America, where the sun burns hot and the country has turned into war zones and refugee camps. Over the course of two decades, Akkad traces the fate of the Chestnut family, who flee their home in the south and spend the better part of their lives in a sprawling, impoverished encampment. This is where Sarat, a young, brave, tomboy, comes of age: “Perhaps the longing for safety was itself just another kind of violence—a violence of cowardice, silence, submission. What was safety, anyway, but the sound of a bomb falling on someone else’s home?” Albert Gaines, a radicalized Southerner, takes Sarat under his wing, equipping her with the fervor and tactics needed to win the war. Akkad piercingly describes the ravaged towns, the gel packets of fruit rations, the torturous effects of growing up in war. Written with precise care for the fictional truth—news articles, press releases, and oral histories emerge throughout – the book sounds a warning blast. American War is a disquieting novel of immense depth, and possibly a classic of our time. --Al Woodworth, The Amazon Book Review

I was recommended this book by a friend, and I will openly admit it isn't my genre. I did, however, come into it with no expectations, and feel it gave me a clearer view of the book overall. And with that being said...I'm torn. I didn't instantly bond with the protagonist or the voice, but after pushing through the initial chapters became immersed in what I found to be a sad, yet captivating mind, and a gripping story. I say gripping, not fast. This wasn't a book I..
Gingerbread
( 11/23/22 ) 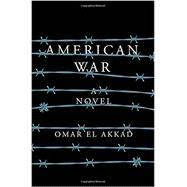