Genocide, State Crime And The Law: In The Name Of The State 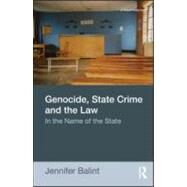 Genocide, State Crime and the Law critically explores the use and role of law in the perpetration, redress and prevention of mass harm by the state

In this broad ranging book, Jennifer Balint charts the place of law in the perpetration of genocide and other crimes of the state together with its role in redress and in the process of reconstruction and reconciliation, considering law in its social and political context. The book argues for a new approach to these crimes perpetrated ''in the name of the state'' - that we understand them as crimes against humanity with particular institutional dimensions that law must address to be effective in accountability and as a basis for restoration.Focusing on seven instances of state crime - the genocide of the Armenians by the Ottoman state, the Holocaust and Nazi Germany, Cambodia under the Khmer Rouge, apartheid South Africa, Ethiopia under Mengistu and the Dergue, the genocide in Rwanda, and the conflict in the former Yugoslavia - and drawing on others, the book shows how law is companion and collaborator in these acts of nation-building by the state, and the limits and potentials of law''s constitutive role in post-conflict reconstruction. It considers how law can be a partner in destruction yet also provide a space for justice.An important, and indeed vital, contribution to the growing interest and literature in the area of genocide and post-conflict studies, Genocide, State Crime and the Law will be of considerable value to those concerned with law''s ability to be a force for good in the wake of harm and atrocity.