A criminal defense attorney who''s made a name for herself by taking on-and winning-the toughest cases, Claire still manages to have a relatively calm life as a Harvard Law School professor, devoted wife, and proud mother to six-year-old Annie. Until one night, when the family is out having dinner, a team of government agents bursts onto the scene.heading straight for Claire''s husband.Tom Chapman has been arrested for an atrocious crime he swears he did not commit. Claire is desperate to believe him-and prove his innocence-even when she learns that Tom once had a different name. And a different face. Now, in a top-secret court-martial conducted by the Pentagon, Claire will put everything on the line to defend the man she loves. But as the evidence keeps piling up, the less she knows who her husband really is.and the more he appears to be a cold-blooded murderer...in Joseph Finder''s High Crimes. 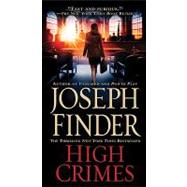