The American Dream vs. The Gospel of Wealth; The Fight for a Productive Middle-Class Economy 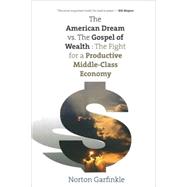 Norton Garfinkle paints a disquieting picture of America today: a nation increasingly divided between economic winners and losers, a nation in which the middle-class American Dream seems more and more elusive. Recent government policies reflect a commitment to a new supply-side winner-take-all Gospel of Wealth. Garfinkle warns that this supply-side economic vision favors the privileged few over the majority of American citizens striving to better their economic condition.Garfinkle employs historical insight and data-based economic analysis to demonstrate compellingly the sharp departure of the supply-side Gospel of Wealth from an American ideal that dates back to Abraham Lincolnthe vision of America as a society in which ordinary, hard-working individuals can get ahead and attain a middle-class living, and in which government plays an active role in expanding opportunities and ensuring against economic exploitation. Supply-side economic policies increase economic disparities and, Garfinkle insists, they fail on technical, factual, moral, and political grounds. He outlines a fresh economic vision, consonant with the great American tradition of ensuring strong economic growth, while preserving the middle-class American Dream.

The American Dream vs. The Gospel of Wealth; The Fight for a Productive Middle-Class Economy (2021-03-17)