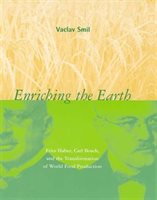 The industrial synthesis of ammonia from nitrogen and hydrogen has been of greater fundamental importance to the modern world than the invention of the airplane, nuclear energy, space flight, or television