Offshoring Of American Jobs: What Response From U.s. Economic Policy? 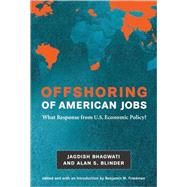 It is no surprise that many fearful American workers see the call center operator in Bangalore or the factory worker in Guangzhou as a threat to their jobs. The emergence of China and India (along with other, smaller developing countries) as economic powers has doubled the supply of labor to the integrated world economy. Economic theory suggests that such a dramatic increase in the supply of labor without an accompanying increase in the supply of capital is likely to exert downward pressure on wages for workers already in the integrated world economy, and wages for most workers in the United States have indeed stagnated or declined