Right And Wrong In Massachusetts

CHECK IT $19.95 cad Indigo
Right And Wrong In Massachuset.. 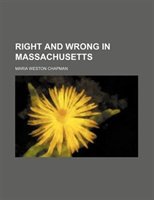 Purchasers can download a free scanned copy of the original book (without typos) from the publisher. Not indexed. Not illustrated. 1839. Excerpt: ... this world, I shall joyfully think of those I.leave in it, the abolitionists,--a band of brothers--united as the heart of one, to accomplish this great work.--But I cannot say so now!--I cannot say so now! And the venerable man thought it no shame to weep over the love and confidence he had seen so wantonly betrayed; artd all the people wept with him. The opposition still wished to continue the discussion, though noon was long past, and their words were but repetition upon repetition. Dr. Follen said, think discussion should now cease, upon the same principle that bids the miller stop the wheel, when there is no more grain in the hopper. The whole unmodified report was accepted--Ayes 183--Noes 94. A better proof than its adoption could not be offered, that the great body of the Massachusetts Society separated that day, with the determination of carrying the work vigorously forward, through means of the elective franchise. They separated, with the triumphant consciousness of a three-days'' battle, Won for their ancient freedom, pure and holy!--For the deliverance of a groaning earth! For the wronged captive, bleeding, crushed, and lowly, Their voice went forth. It was a painful trial they had passed; painful as when brother meets the visor''d face of brother in civil war. They had hoped that this cup might pass, but they had not refused to drink it; and their eyes were opened, and the bitterness of their grief taken away. The same Board of Managers having been selected, the acceptance of the report and the rejection of the new paper, were sufficient indications of the course they were expected by the Society to pursue. They therefore suggested to their agents, Mr. St. Clair and Mr. Wise, that, as there existed in the Commonwealth a difference of opinio...