Myths And Folk-lore Of Ireland 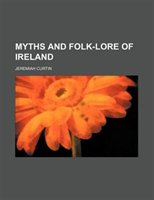 Book may have numerous typos, missing text, images, or index

Purchasers can download a free scanned copy of the original book (without typos) from the publisher. 1889. Excerpt: ... GILLA NA GRAKIN AND FIN MAC- CUMHAIL. r I ^HERE was a blacksmith in Dun Kinealy be -*- yond Killybegs, and he had two young men serving him whose names were Cesa MacRi na Tulach and Lun Dubh MacSmola. When their time was up the young men settled with the blacksmith and took their pay of him. After they had eaten breakfast in the morning they went away together. When they had gone some distance from the house they changed their gait, so that when they took one step forward they took two backwards; and when evening came they were not five perches away from the house where they had eaten breakfast in the morning. Then one said to the other: I suppose what is on one of us is on the other. What''s that? asked the first. We are both in love with Scehide ni Wananan. That is true, said the other, we are both in love with the blacksmith''s maid. When this was said they turned and went back to the house. The blacksmith welcomed them, and was glad. You need not welcome us, said they; we have not come back to you to seek hire; but we are both in love with Scehide ni Wananan, and you ''ll have to settle the matter for us. Well, said the blacksmith, I can do that. We ''ll open the two doors of the forge, and let you and the maiden go in and stand in the middle of the place. Then do you two go out, one at each door, and the man she ''ll follow will have her. The three came in, --one man went out at each door of the forge; Scehide followed Lun Dubh. When he saw this Cesa spoke up, and said: I ''m willing to leave her with you; but turn back a moment here to me, for the word that ''ll be between us. Lun Dubh turned back into the forge, and Cesa said: Put your finger on this anvil. Lun Dubh put his finger on the anvil. Cesa, catching up a good spike, which the old blacksmith had made, ...