The Dynamics Of Ancient Empires: State Power From Assyria To Byzantium 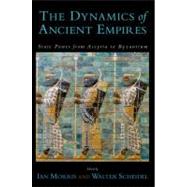 Yet despite the global prominence of empire, individual cases are often studied in isolation. This series seeks to change the terms of the debate by promoting cross-cultural, comparative, and transdisciplinary perspectives on imperial state formation prior to the European colonial expansion. The world''s first known empires took shape in Mesopotamia between the eastern shores of the Mediterranean Sea and the Persian Gulf, beginning around 2350 BCE. The next 2,500 years witnessed sustained imperial growth, bringing a growing share of humanity under the control of ever-fewer states. Two thousand years ago, just four major powers - the Roman, Parthian, Kushan, and Han empires - ruled perhaps two-thirds of the earth''s entire population. Yet despite empires'' prominence in the early history of civilization, there have been surprisingly few attempts to study the dynamics of ancient empires in the western Old World comparatively. Such grand comparisons were popular in the eighteenth century, but scholars then had only Greek and Latin literature and the Hebrew Bible as evidence, and necessarily framed the problem in different, more limited, terms. Near Eastern texts, and knowledge of their languages, only appeared in large amounts in the later nineteenth century. Neither Karl Marx nor Max Weber could make much use of this material, and not until the 1920s were there enough archaeological data to make syntheses of early European and west Asian history possible. But one consequence of the increase in empirical knowledge was that twentieth-century scholars generally defined the disciplinary and geographical boundaries of their specialties more narrowly than their Enlightenment predecessors had done, shying away from large questions and cross-cultural comparisons. As a result, Greek and Roman empires have largely been studied in isolation from those of the Near East. This volume is designed to address these deficits and encourage dialogue across disciplinary boundaries by examining the fundamental features of the successive and partly overlapping imperial states that dominated much of the Near East and the Mediterranean in the first millennia BCE and CE. A substantial introductory discussion of recent thought on the mechanisms of imperial state formation prefaces the five newly commissioned case studies of the Neo-Assyrian, Achaemenid Persian, Athenian, Roman, and Byzantine empires. A final chapter draws on the findings of evolutionary psychology to improve our understanding of ultimate causation in imperial predation and exploitation in a wide range of historical systems from all over the globe. Contributors include John Haldon, Jack Goldstone, Peter Bedford, Josef Wiesehofer, Ian Morris, Walter Scheidel, and Keith Hopkins, whose essay on Roman political economy was completed just before his death in 2004.

The Dynamics Of Ancient Empires: State Power From Assyria To Byzantium (2022-11-03)