Bringing together disparate fields - politics, medicine, sexuality, childhood, religion, migration, and many more topics - this new collection of essays demonstrates the richness of studying empire through the lens of gender. This more inclusive look at empire asks not only why the empire was dominated by men, but how that domination affected the conduct of imperial politics. The fresh, new interpretations of the British Empire offered here will interest readers across a wide range, and will demonstrate the vitality of this innovative approach and the new historical questions it raises. SERIES DESCRIPTION The purpose of the five volumes of the Oxford History of the British Empire was to provide a comprehensive study of the Empire from its beginning to end, the meaning of British imperialism for the ruled as well as the rulers, and the significance of the British Empire as a theme in world history. The volumes in the Companion Series carry forward this purpose by exploring themes that were not possible to cover adequately in the main series, and to provide fresh interpretations of significant topics. 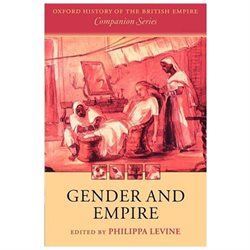