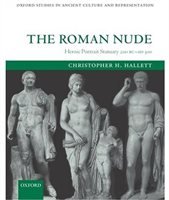 Men were portrayed naked holding weapons - the naked emperor might wield the thunderbolt of Jupiter - while Roman women assumed the guise of the nude love-goddess, Venus. When faced with these strange images, modern viewers are usually unsympathetic, finding them incongruous, even tasteless. They are mostly written off as just another example of Roman `bad taste''. This book offers a new approach. Comprehensively illustrated with black and white photographs of nude Romans represented in a wide range of artistic media, it investigates how this tradition arose, and how the nudity of these images was meant to be understood by contemporary viewers. And, since the Romans also employed a variety of other costumes for their statues (toga, armour, Greek philosopher''s cloak), it asks, `What could nudity express that other costumes could not?'' It is Hallett''s claim that - looked at in this way - these `Roman nudes'' turn out to be documents of the first importance for the cultural historian.