Adventures with Iphigenia in Tauris : A Cultural History of Euripides' Black Sea Tragedy 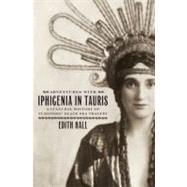 Human sacrifice, a spirited heroine, a quest ending in a hairsbreadth escape, the touching reunion of long-lost siblings, and exquisite poetry--these features have historically made Euripides'' Iphigenia in Tauris one of the most influential of Greek tragedies Specifications

Yet, despite its influence and popularity in the ancient world, the play remains curiously under-investigated in both mainstream cultural studies and more specialized scholarship. With Adventures with Iphigenia in Tauris, Edith Hall provides a much-needed cultural history of this play, giving as much weight to the impact of the play on subsequent Greek and Roman art and literature as on its manifestations since the discovery of the sole surviving medieval manuscript in the 1500s. The book argues that the reception of the play is bound up with its spectacular setting on the southern coast of the Crimean peninsula in what is now the Ukraine, a territory where world history has often been made. However, it also shows that the play''s tragicomic tenor and escape plot have had a tangible influence on popular culture, from romantic fiction to Hollywood action films. The thirteen chapters illustrate how reactions to the play have evolved from the ancient admiration of Aristotle and Ovid, the Christian responses of Milton and Catherine the Great, the anthropological ritualists and theatrical Modernists including James Frazer and Isadora Duncan, to recent feminist and postcolonial dramatists from Mexico to Australia. Individual chapters are devoted to the most significant adaptations of the tragedy, Gluck''s opera Iphigenie en Tauride and Goethe''s verse drama Iphigenie auf Tauris. Richly illustrated and accessibly written, with all texts translated into English, Adventures with Iphigenia in Tauris argues elegantly for a reappraisal of this Euripidean masterpiece.

Adventures with Iphigenia in Tauris : A Cultural History of Euripides' Black Sea Tragedy (2018-12-04)

Adventures With Iphigenia In Tauris: A Cultural History Of Euripides&apos; Black Sea Tragedy (2018-07-28)