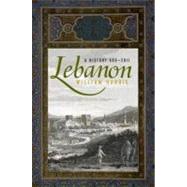 For most Americans, the civil war in Beirut is their sole point of connection with Lebanon

But Lebanon, a crossroads of major religious communities, has held a central place in the geopolitical significance of the eastern Mediterranean and the Middle East for many centuries. In this book, William Harris synthesizes the history of Mount Lebanon and the surrounding areas within the modern Lebanese state - from the Islamic conquest of the Levant to modern times. Harris relates the communities that characterize Mount Lebanon and its vicinity, while interpreting the evolution of modern Lebanon in its multi-communal context. He traces the consolidation of Lebanon''s Christian, Muslim, and Islamic derived sects from their origins between the sixth and eleventh centuries. The identities of Maronite Christians, Twelver Shia Muslims, and Druze, the mountain communities, developed alongside assertions of local chiefs under external powers from the Umayyads to the Ottomans. The chiefs began interacting in a common arena when the Druze lord Fakhr al-Din Ma''n achieved domination of the mountain under the Ottomans in the early seventeenth century. The book offers a fresh perspective on subsequent trends, knitting together the interplay of the elite under the Sunni Muslim Shihab relatives of the Ma''ns after 1700 with demographic instability as Maronites overtook Shia as the largest community and expanded into Druze districts. By the 1840s many Maronites conceived the common arena as their patrimony. Maronite/Druze conflict ensued. Modern Lebanon arose out of European and Ottoman intervention in the 1860s to entrench sectarian peace in a special province. In 1920, after the Ottoman collapse, France and the Maronites enlarged the province into the modern country, with a pluralism of communal minorities headed by Maronite Christians and Sunni Muslims. The book considers the flowering of this pluralism in the mid-twentieth century, and the strains of new demographic shifts and of social resentment in an open economy. External intrusions after the 1967 Arab-Israeli war rendered Lebanon''s contradictions unmanageable and the country fell apart. The book contends that Lebanon has not found a new equilibrium and has not transcended its sects. There is an uneasy duality: Shia have largely recovered the weight they possessed in the sixteenth century, but Christians, Sunnis, and Druze are two-thirds of the country.