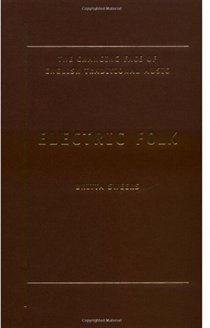 In the 1960s and 1970s, a number of British musicians rediscovered traditional folk ballads, fusing the old melodies with rock, jazz, and blues styles to create a new genre dubbed electric folk ... Specifications

In the 1960s and 1970s, a number of British musicians rediscovered traditional folk ballads, fusing the old melodies with rock, jazz, and blues styles to create a new genre dubbed electric folk or British folk rock. This revival featured groups such as Steeleye Span, Fairport Convention, and Pentangle and individual performers like Shirley & Dolly Collins, and Richard Thompson. While making music in multiple styles, they had one thing in common: they were all based on traditional English song and dance material. These new arrangements of an old repertoire created a unique musicalvoice within the popular mainstream. After reasonable commercial success, peaking with Steeleye Span's Top 10 album All Around My Hat, Electric Folk disappeared from mainstream notice in the late 1970s, yet performers continue to create today. In Electric Folk: The Changing Face of English Traditional Music, Britta Sweers provides an illuminating history and fascinating analysis of the unique features of the electric folk scene, exploring its musical styles and cultural implications. Drawing on rare historical sources, contemporary musicjournalism, and first-hand interviews with several of electric folk's most prominent artists, Sweers argues that electric folk is both a result of the American folk revival of the early 1960s and a reaction against the dominance of American pop music abroad. Young British folk-rockers, such asRichard Thompson and Maddy Prior, turned to traditional musical material as a means of asserting their British cultural identity. Yet, unlike many American and British folk revivalists, they were not as interested in the purity of folk ballads as in the music'spotential for lively interactionwith modern styles, instruments, and media. The book also delves into the impact of the British folk rock movement on mainstream pop, American rock music, and neighboring European countries. Ultimately, Sweers creates a richly detailed portrait of