Sayings Of The Buddha: New Translations From The Pali Nikayas

''As if someone were to hold up a lamp in the dark so that those with eyes could see - in exactly the same way Gotama has made the truth clear in various ways.'' Gotama the Buddha, who lived the life of a wandering ascetic in northern India during the fifth century BCE, is looked to as the founder of one of the world''s major religions Specifications

One of the main sources for knowledge of his teachings is the four Pali Nikayas or ''collections'' of his sayings. Written in Pali, an ancient Indian language closely related to Sanskrit, the Nikayas are among the oldest Buddhist texs and consist of more than one and a half million words. This new translation offers a selection of the Buddha''s most important sayings reflecting the full variety of material contained in the Nikayas: the central themes of the Buddha''s teaching (his biography, philosophical discourse, instruction on morality, meditation, and the spiritual life) and the range of literary style (myth, dialogue, narrative, short sayings, verse). 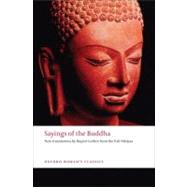