Originally published anonymously, The Federalist Papers first appeared in 1787 as a series of letters to New York newspapers exhorting voters to ratify the proposed Constitution of the United States

Still hotly debated, and open to often controversial interpretations, the arguments first presented here by three of America’s greatest patriots and political theorists were created during a critical moment in our nation’s history, providing readers with a running ideological commentary on the crucial issues facing democracy.Today The Federalist Papers are as important and vital a rallying cry for freedom as ever.This edition features the original eighteenth-century text, with James Madison’s fascinating marginal notations, as well as a complete text of the Constitution. 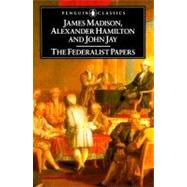