Element Encyclopedia Of Magical Creatures: The Ultimate A-z Of Fantastic Beings From Myth And Magic 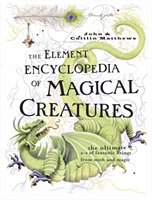 Third in the hugely popular series of Element Encyclopaedias, this is the most comprehensive guide you?ll ever find to every magical creature from myth, folklore and legend around the world Specifications

This compendium of magical creatures explores the history, folklore and mythology of these fascinating beasts throughout all magical worlds. Including stories, celebrations, traditions, and amazing facts about the creatures, this book spans every major culture across the globe. Many of the creatures described in the book have appeared in the fictitious worlds of the brothers Grimm, Lewis Caroll, J.K. Rowling, Tolkien and countless other writers who have stirred our imaginations since childhood fairytales. From unicorns, giants, fairies, elves, goblins, dwarves and trolls to nymphs, mermaids, sphinxes, ogres, cyclops, dragons, mermaids, salamanders, basilisks, banshees, werewolves, griffins, centaurs, satyrs and gremlins - this is the ultimate reference book on creatures from the magical world. But have you ever heard of Cherufes, Lampaluguas or the Quetzal? The cross-cultural focus spans from the most ancient of creatures to those which have come to prominence relatively recently. Every obscure and mythological creature is described in detail in this fantastic book, including gods from many cultures and everyday animals that carry magical symbolism. The information not only refers each creature to the mythology surrounding it, but also illustrates how many of these magical beasts relate to each other and are interconnected across mythical worlds.

Element Encyclopedia Of Magical Creatures: The Ultimate A-z Of Fantastic Beings From Myth And Magic (2020-10-26)