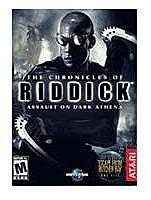 In The Chronicles of Riddick Assault on Dark Athena the player takes the role of Riddick using stealth and action to overcome the merciless crew of the predatory Merc ship Dark Athena which awaits its prey in the dark reaches of space. Cheating death through a series of spectacular battles and events, Riddick will fight for his life amid a storm of malevolence and horror.