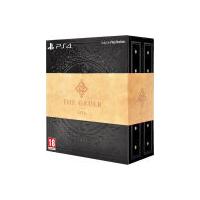 Seek out the ultimate version of The Order 1886 with the Collector's Edition containing: Replica Knight&rsquo;s Vial Pendant The Order: 1886 Game Woven coat of arms patches for Isabeau &amp; Galahad. Symbol Stickers. Artwork postcards in wax sealed envelope. Exclusive Digital Content - Knight&rsquo;s Arsenal Pre-order DLC Official Soundtrack with Bonus Tracks &amp; Unreleased Behind-The-Scenes Footage. The Order: 1886&trade; introduces players to a unique vision of Victorian-Era London where Man uses advanced technology to battle a powerful and ancient foe.&nbsp; As a member of an elite order of knights join a centuries-old war that will determine the course of history forever. Alternate History - The Order: 1886 allows players to discover a unique version of Victorian-Era London where technology and the supernatural collide. Players will wield advanced weapons and gadgets that didn&rsquo;t exist during that era and the realism of the game experience will make you feel like these elements could have been very plausible during the time. Historical Mythology - The game introduces a unique mythology that will fuse actual history (real world places figures and events) with twists on familiar myths and legends to create an alternate history from the one we know today. Filmic Immersion - The game&rsquo;s unique filmic presentation is designed to replicate the texture of film and use real-world motion picture and cinematography techniques to emphasize dramatic character performance and realism. Ready At Dawn Legacy - Created and developed by Ready At Dawn Studios award-winning developers of Daxter&reg; God of War&reg;: Chains of Olympus (PSP Game of the Year) and God of War&reg;: Ghost of Sparta. The studio is known for pushing their target hardware to its limits as has been seen from their past titles and they are now setting their sights and expertise on the PS4 system. Click Images to Enlarge