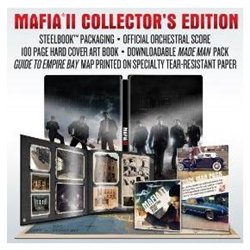 Climb the Mafia ranks at Empire Bay in the Golden Age! Product Information Mafia II brings you into the world of Vito Scaletta, a tough petty criminal working his way up the Mafia family chain and making a criminal name for himself of the streets of Empire Bay. Along with lifelong friend Joe, Vito dreams of the wealth, respect, and easy life that come from being a Made Man - and they're going to do what it takes to get there. Choose your game difficulty then work up the criminal food chain with escalating crime levels while gathering artwork and other collectibles. Choose carefully your weapons, vehicles, and tactics, avoid the arrest by the police, and you may just find yourself one of the untouchable few of the Mafia in this third-person-shooter. Product Features Gangster-Movie Experience - Through strong, authentic characterization and compelling narrative, the mature storyline will make you understand the pull and impossible escape of life in the Mob. Action-Packed Gameplay - Take part in car-to-car gunfights, hand-to-hand combat, and gunplay, that together with the story form an intense and exciting gaming experience. All-New Engine Powers the Next Generation of Mob Video Games - Travel from outdoor environments to intricate interiors without the load time thanks to 2K Czech's next-generation engine. Authentic Script from the Writer of Mafia I - Get immersed in a story that brings to life the world of the Mob and the survival, camaraderie, and pitfalls in pursuing the American Dream. Music as Environment - Experience the Golden Era in sound as well as visuals with tracks from some of the era's most influential artists. The Betrayal of Jimmy - Exclusive free add-on content only available on PS3. Includes Collectible SteelBook Casing - Brushed metallic SteelBook hard case with debossed logo and containing art features Vito and Joe, the stars of Mafia II. Official Orchestral Score - The Mafia II score is Empire Bay's symphonic m